1: How would you describe your meadow, e.g. stand alone, part of a smallholding, part of a farm, managed lawn?

There are currently 5 fields which make up our 11 acre small holding. The aim is to make them all more florally diverse, with one or 2 with potential for regular hay crops, and even greater floral density

2: How would you best describe your management of the meadow, and what are your priorities for the meadow e.g. commercial farm, hobby farmer/smallholder, purely managing the meadow on its own for its wildflowers/biodiversity?

We are hobby smallholders who want to leave the property and land in better shape when we leave it as stewards, than it was when we took over. With the meadows, since I’ve had a long term interest in insect : flower interactions in a garden setting, extending this to our meadows was a logical, though relatively recent, step to take, since encouraging invertebrates usually improves the diversity higher up the natural world’s web of interconnectedness. And I had no idea how quickly exotic looking waxcap mushrooms would start to appear in all these meadows, (see header image).

3: Roughly how big is/are the meadow(s)?

Currently most of the meadows are just over an acre, with one much bigger field, which we plan to subdivide this year, to aid management.

4: Roughly how high above sea level?

The holding sits in North Carmarthenshire, and is between 200 and 275 metres above sea level.

5: How long have you been managing the meadow for wild flowers?

We’ve owned the property for about 22 years, and lived here permanently for 11. The land was grazed with sheep by our neighbour for about 16 years, before we began doing anything ourselves over just the last 3 to 4 years. Before that we were working on derelict buildings, hedges and the garden.

6: Do you know when the meadow was last ploughed/reseeded?

Not for at least 45 years

7: Do you know when the meadow last received fertiliser or farm yard manure?

Not for at least 22 years. I’ve spread a minimal amount of wood burner ash on some fields and also minimal sea weed extract during last winter – in an attempt to mitigate trace mineral deficiencies in our (recently) 2000 mm annual rainfall area.

8: What do the field boundaries consist of, e.g. laid/regularly flailed hedges, banks with no hedges, fence only, mature hedges, mature trees?

Most of the hedges, mainly sited on banks, hadn’t been touched for decades, when we acquired the property. Some had been flailed when we arrived. Some have since been laid by me occasionally, but not then flailed, so are semi mature.

In addition there are quite a lot of mature trees – Oak, Willow, Hazel, Ash (together with areas of conifers), mainly along several field boundaries, along our bordering stream and around the property. We have planted a lot of trees in our time, of many native and more exotic forms.

9: Is the meadow ever grazed by stock, and if so by what, and roughly when?

Since we took over managing the meadows ourselves, we’ve built up a small flock of Tor ddu badger face sheep – currently 16 ewes/ewe lambs, and a ram. We think this is the maximum we want, to allow less intensive, more sympathetic grazing of the land. ( Maybe it will be too many?) We are using them mainly as a management tool, and this year are trying much later and more limited lambing to see how this fits in with our meadow regime. We sell the lambs early as stores. So the land has sheep on some of it all year round, but at a low intensity. Our main hay meadow, to date, has the sheep removed from it in mid January.

10: Is the meadow regularly cut, or burned and if so, when? And is the material removed and used as hay or bedding, or left on the field?

The main meadow which is steeply sloping is cut and collected manually using a BCS Powerscythe. (For now). And collected in big bags, then manually baled. We’re fortunate to have help from 2 near neighbours with doing some of this, and one – Dave Bevan who even designed and built the baler! A lot of hard work, but a cheap solution to a small scale annual task, and it means it can be tackled in smaller sections weather permitting. I’ve also topped our lower wet litter meadows later in the year and left ‘ricks’ of raked off material which the sheep have burrowed into in late autumn to eat some of it. Much to my surprise. 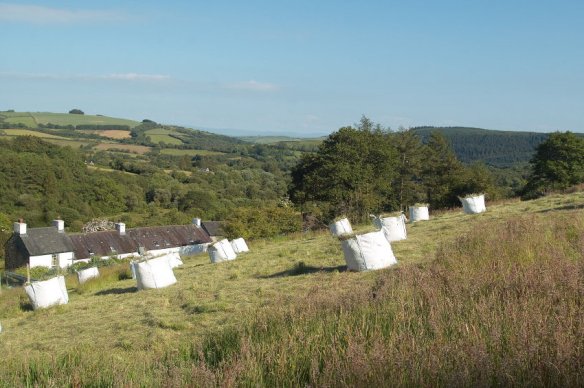 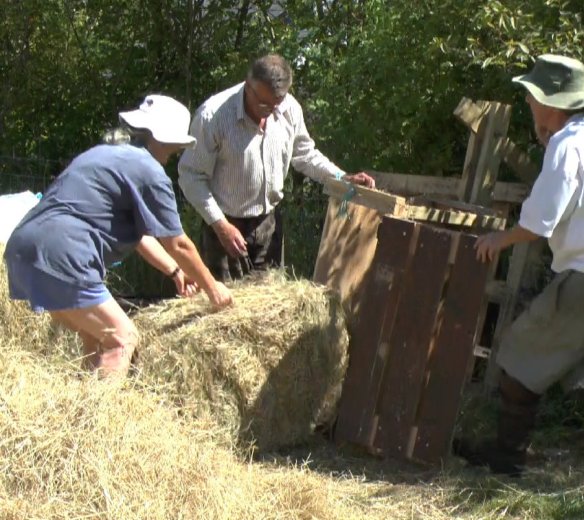 11: Has the meadow ever received any herbicide treatment, and if so, what, and when?

Our lower wet ‘litter’ meadows were mostly mono culture, shoulder high soft rush 2 years ago. After acquiring the Powerscythe, we cut this, raked it into huge piles and since then have used selective herbicide on rush regrowth a couple of times a year using a manual weed wiper, just applied to any rush regrowth. The effects have been remarkable.

Wildflowers are evident already, and a variety of grasses have appeared spontaneously to cover what was in many areas bare ground, once all the rush debris had been raked up. In addition a small dribble applicator has been used with glyphosate on Marsh thistle regrowth – a real problem in patches. There will be a big issue going forwards with the change if regulations on herbicide availability, for managing such fields. Our observations of other local management of rushes, simply by cutting, is that it just doesn’t work in such wet conditions – the rushes are taking over even steeply sloping fields.

12: Have you ever imported or scattered any flower seed or hay from other sources in the meadow?

Yes, selected seeds from a couple of local meadows have been added over the last 4 years – starting with Yellow rattle, but also other native flowering plants. In one field I’ve also scattered seed of some early flowering bulbous meadow plants which have great appeal as nectar sources for our native bumble bees and honeybees. It’s too early to see how these will fare. Within our garden, I’ve become interested by how more stable plant communities can seem to become, with greater species diversity – even if the species move around within a particular area.

13: Is the meadow flat, or sloping, and is it hillside/valley bottom?

3 meadows, including the current hay meadow are quite steep – the rest are very gently sloping valley bottom.

14: Do you know roughly what the soil ph is?

No, though likely to be acid side of neutral. Thin top soil over shale on hillside. Variable depths of peat over layers of grey clay and bands of stream stone in the valley bottom fields. As well as the stream, we have restored several narrow but moderately deep drainage channels through these wet meadows to avoid too much standing water for much of the year.

15: Have you ever had a botanical survey carried on the meadow, and if not would you be interested in having this done?

Never had a survey carried out . Not in any formal sense, but I do walk the meadows frequently, and seem to keep spotting new flowers and fungi every year. It would be great to have a more formal survey carried out, though cost would be an issue. In particular I find identifying some of the grasses which are returning is a little tricky.

16: Would you be happy for your meadow, and the above data to feature in the Gallery section of the CMG website?

17: Would you be interested in help from a contractor in managing any aspect of meadow maintenance, and if so what help would be useful to you?

Down the road, as limbs age, I can see that help with weed wiping and or cutting/topping may well be necessary. We’ve always laid our own hedges so far, but used contractors to put up fencing. As always in this part of the world, finding a weather window when any of this work can be carried out, or using equipment which would be appropriate for the wet meadows will always be a potential problem.

Uploaded to the gallery in January 2016.

If you own or manage a meadow in Carmarthenshire which you would like to add to these gallery pages, please email Julian Wormald, the current website administrator, at