I guess many of our meadows are just past their peak of interest. Some of the early flowers and grasses will have set, or be setting seed, but there’s still much to see. And for those who have meadows where removing a hay crop is part of the management regime, still the tricky issue of getting a crop off it. Dry! Or maybe now’s the time that animals are allowed back in, to graze off some of the surplus vegetation… 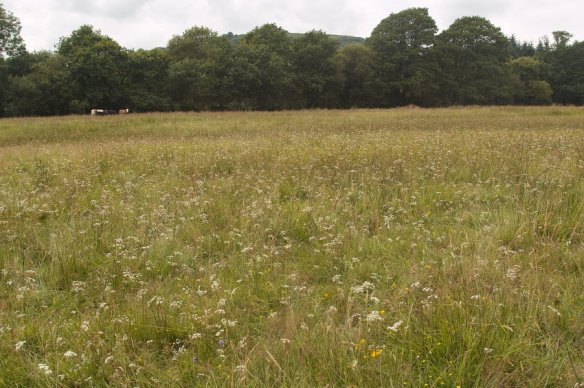 (Meadow at Cwmdu, above)

For the second year running, at least in our part of Carmarthenshire, we seem to be in a weather pattern which makes conventional hay making very challenging – not huge amounts of rain, but generally cool conditions, less sun than you would hope for, and some rain at least every 48 hours or so. 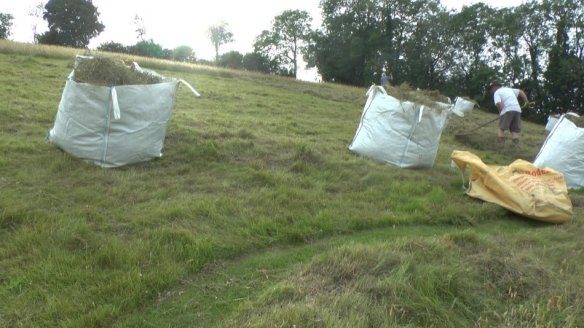 Using semi manual methods on our small acreage we can take a gamble and remove small amounts at a time and hope to get it processed within 36 hours or so by frequent turning.

This very labour intensive method does mean that you walk over much of the field, and this enabled me to spot some very attractive red/orange Waxcap mushrooms in 3 or 4 discrete colonies. From their colour, form and arrangement in small clusters I reckon they might be the quite rare species Hygrocybe splendidissima. And interestingly I found similar mushrooms in the field about early to mid July last year – way before the other more common late summer/autumnal other waxcap species which we see. 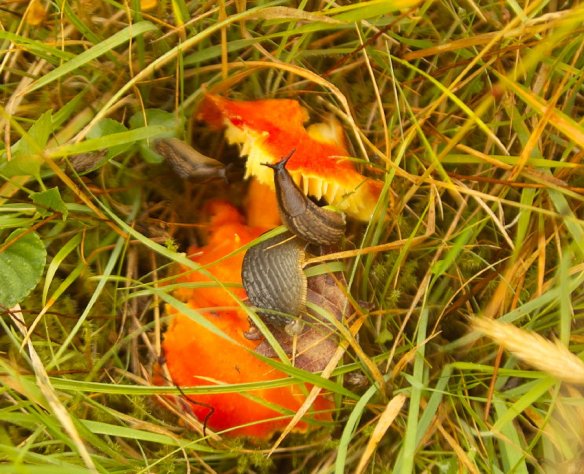 The pictures also illustrate a point discussed at the recent Meadows Group Summer Social meeting at Dinefwr, that finding these mushrooms in a meadow can be tricky. Firstly they tend to sit quite low down amongst the moss which forms a significant sub layer. (I’ve squashed down some of the vegetation to take these photos)…

Secondly the huge slug population in a meadow like this will very quickly devour any such mushrooms. So they are a very fleeting, but “splendid” occasional sighting to look out for, before the gorgeous colour is lost…

I thought I’d also mention some fascinating research I discovered just over a year ago hinting at the possible beneficial or therapeutic action for any animals grazing some of the diverse range of plants which may be present in a traditional meadow.

But to summarise my interest, it began with considering the massed flowers of Betony, Stachys officinalis, which you find in some local meadows at this time of the year… 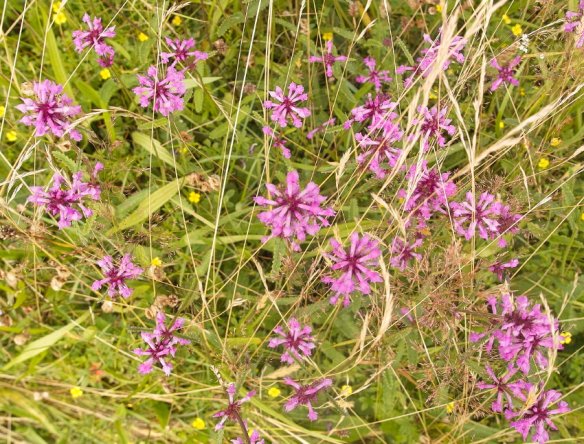 (Images from another Cwmdu meadow last week). The key word here is ‘officinalis‘ in the species name? I didn’t know until last year that any plant with this word as part of its nomenclature suffix has recognised historical medicinal, or herbal properties. For further thoughts on what these beneficial effects might be in the case of Betony, click here, and here. But what about the effects on livestock grazing these herbs, or ingesting the leaves in hay? Or indeed on the insects gathering nectar from it? Has anyone even researched the effects of anti-inflammatory, or other drugs on insects? Or is it just those agents that kill them effectively, which have been studied as having commercial value?

It has dawned on me very late in the day as a retired veterinary surgeon, that we received no tuition at all on the possible medicinal value of different constituents of grazed herbage to the animals on these pastures. In part this was because the then, (and still?), prevailing approach was to maximise yields by minimising the selection of plants growing in pasture to just the most efficient producers of greenery, protein and carbohydrate and if problems in any stock which grazes such fodder develop, then to medicate with synthetic additions, or supplements. Years ago I attended a multidisciplinary symposium at London’s Royal Society of Medicine in Wimpole Street, on current developments in analgesia. And was somewhat surprised to hear from the medics then at the cutting edge of human pain relief research, that no new drugs had really improved on the analgesic properties of morphine. Which is, of course, derived from the Opium Poppy, and has been in use for centuries…

I did wonder at the time how it is, or why, such wonderfully powerful analgesic chemicals are sitting in the sap or leaves of plants which can be easily grown, and harvested for our benefit. And what benefit, if any, such chemicals are to the plant? There are huge historical knowledge bases around the world particularly in the Far East, but also in Europe, which most in the West have neglected over the last century, of native plants with significant beneficial pharmacological actions.

But this fascinating recent Austrian research investigation took a range of plants with reputed anti inflammatory actions which had been recorded in the very significant VOLKSMED, (folk medicine), data base, and using extracts from their tissues subjected them to the range of contemporary ‘in vitro’ laboratory trials used to assess the efficacy of pharmacologically active chemicals.

Trawl through the paper’s details for some of these plants, and you will find, for example, that in the data on Ribwort plantain (Plantago lanceolata) shown above and below, in certain laboratory tests the leaf extract had anti-inflammatory action equal to hydrocortisone, and  phenylbutazone (“bute”) which are potent and commonly used anti-inflammatory ‘drugs’…

What about Meadow Sweet, Filipendula ulmaria? Some tests showed anti-inflammatory activity(AIA) in both leaves and flowers. 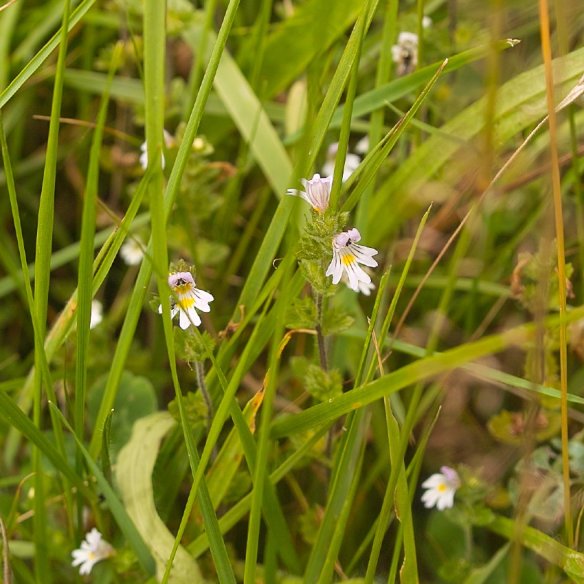 So fresh, or in hay, there is almost certainly some effect on grazing animals of ingesting this sort of a diverse cocktail of potentially pharmacologically active chemicals. In addition there is the added potential impact on the carcase quality and flavour of, say, a lamb grazing such species diverse pasture when compared with the much narrower plant species range present in a more conventional “improved” pasture.

It seems that this Austrian research is quite innovative, in trying to quantify just how effective some of these common plants might be, when compared with modern ‘drugs.’ In the paper’s conclusion the authors state that:

” Despite the once wide use of traditional European herbals, modern science has barely started to scientifically explore this treasure (Adams et al., 2009). When entering the term “Traditional European Medicine (TEM)” in the database of SciFinder only 11 citations are dedicated to this term. The concept “Traditional Chinese Medicine (TCM)”, on the other hand, reveals 25947 and “Ayurveda” 970 references.”

Of course there is a very rich local history in Carmarthenshire of traditional use of herbal medicine in humans (and animals?), dating back at least to the physicians of Myddfai, but it’s not so easy to find specific references to particular plants and their benefits, or such scientific appraisal (at least on line), perhaps mirroring the paucity referenced above. It would be great for others to contribute any knowledge they have on this subject …

Finally, although not considered in the Austrian paper, I often wonder if our sheep are at least in part as well behaved and placid as they seem to be, because of the significant quantities of Valerian, Valeriana officianalis, growing in our lower wet meadows, which they seem to enjoy eating. Even if it seems that extracts of the roots of the plant have the most benefit as a treatment for insomnia or as a mild sedative.

(Apologies for the odd formating change halfway through this post. Try as I might, I can’t seem to correct it!)
Thanks for reading.

9 thoughts on “What’s In A Meadow? Medicinal Plants?”