On Saturday October 8th, the Meadows Group held an autumnal meeting in the lovely visitor centre at Myddfai. 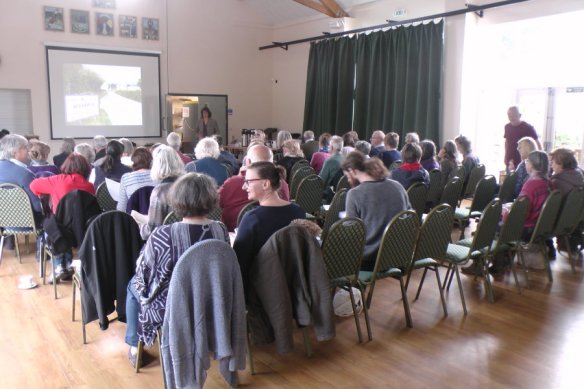 Welcoming the 60 or so people present, Isabel Macho hosted the morning’s events which began with an interesting presentation by Sheikh Ahmed, who is a director of the community run Visitor Centre, and has a long background in pharmaceutical research, and the development of contemporary cancer treatments. He gave a summary of the history and legend of the Physicians of Myddfai, and pointed out that much of the story’s detail is still debatable. Reference was made to the Red Book of Hergest, and that even back in the 13/1400’s over 850 medicinal remedies based on plants were written down. Suitable plants were foraged or specifically grown for the purpose, and up to 25% of these were of non native plants, brought into the country and disseminated by the monasteries which had active links with many European countries at this time.

Bringing things up to date Sheikh noted that the WHO lists over 7,000 plants as having medicinal properties, with as many as 25% of modern medicines derived from the active ingredients in plants. 4 contemporary plant derived medicines were discussed in a bit more detail. Narcissus yielding galantamine for use in treating dementia, Foxgloves and digoxin for the treatment of heart problems, and Opium Poppy as a source of analgesics all were mentioned. Willow and Meadowsweet (below) were both referenced as sources of salicylic acid familiar to many as aspirin, and now having a wide range of other therapeutic actions, beyond what was first recognised 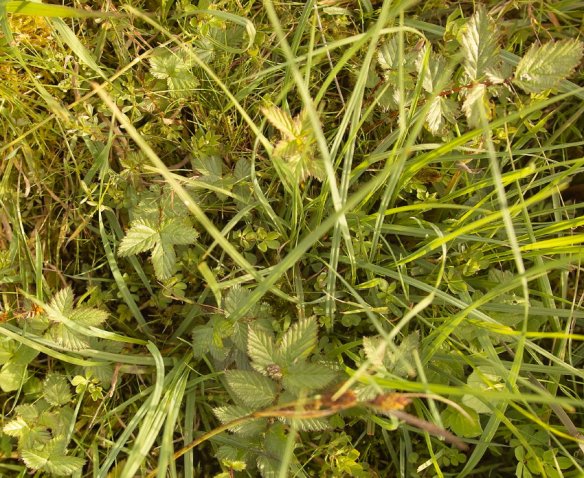 Further consideration of this anti inflammatory drug highlighted the long history of humans discovering the potential benefits of different plants. There are records of willow bark being used as early as 3,000 BC. But it was “rediscovered” many times over the intervening centuries, with a final key discovery in the late C19th being to modify the raw plant ingredient to reduce the risk of intestinal bleeding which is otherwise a significant and serious side effect. I wonder how many readers have noticed that livestock don’t need to be told that there is value in eating willow bark? Our sheep avidly strip recently cut branches, and we’ve noticed significant improvements in physical appearance, and demeanour of some of our ewes after they’ve had access to this material. 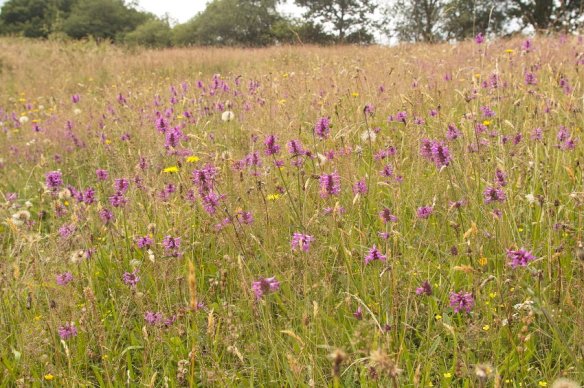 I couldn’t help thinking that much of what many meadow group members are trying to do has echoes of this long human struggle of discovery/rediscovery. Much knowledge of how land was managed, locally, in the past has been lost, and we are all trying to rediscover how to deal with the challenges of our plots or holdings, to them more florally, and other species, diverse. 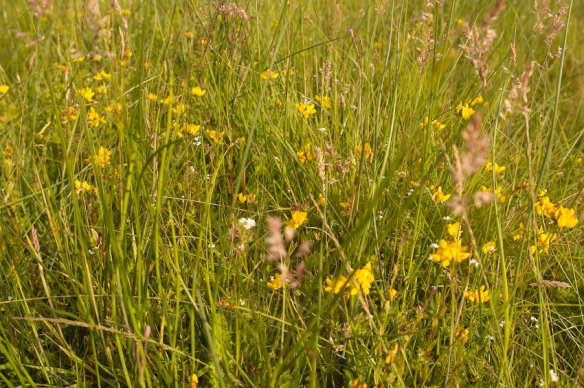 This was well illustrated by the first meadow owners, Pablo and Maggie, who talked about managing their holdings land at Pystyllgwyn in the Cothi valley. Maggie made the valuable point that left to nature, most land in the county will naturally revert to woodland – a process that may take a few decades but will surely happen without human intervention. 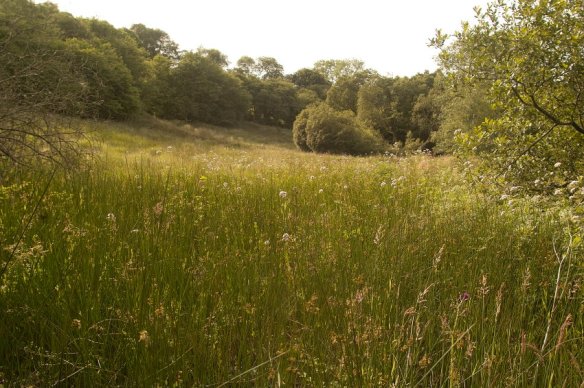 Their particular challenges were/are fields with significant bramble and Himalayan Balsam infestation, and they described how using a combination of initial mechanical cutting, followed by repeated manual pulling and composting of balsam stems in tied Big Bags had turned the tide in controlling it. They also have 2 ponies which help in their management plans. 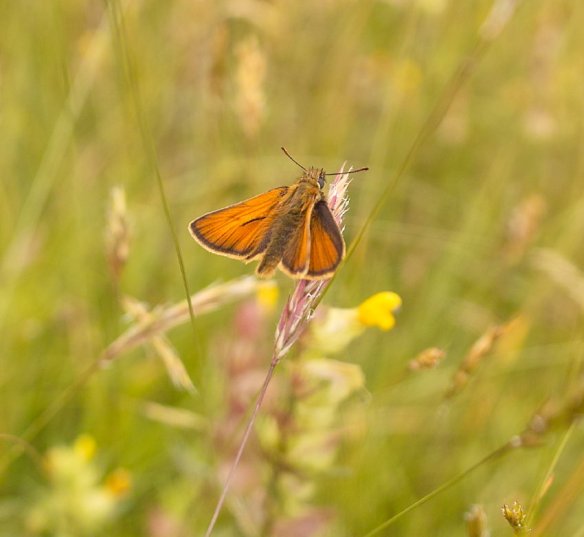 This was followed by a presentation by Laurence Brooks who talked about his holding near Pen Y Bont, in the West of the county. Laurence explained that he’s trying to manage it as a productive, sustainable holding using a mix of cattle and sheep. Various issues were discussed – the potential impact on field ecology from installing ponds and drains, small scale issues with bracken management, and a lively discussion followed the issue of whether to use yellow rattle as a management tool in an “improved” pasture as an aid to increasing floral diversity. This seems to be a topics where different meadow owners have different experiences. Is yellow rattle palatable to different livestock, and in hay? Again there were differing opinions, and the yellow rattle topic has been discussed on these pages before. Click here and here for more. 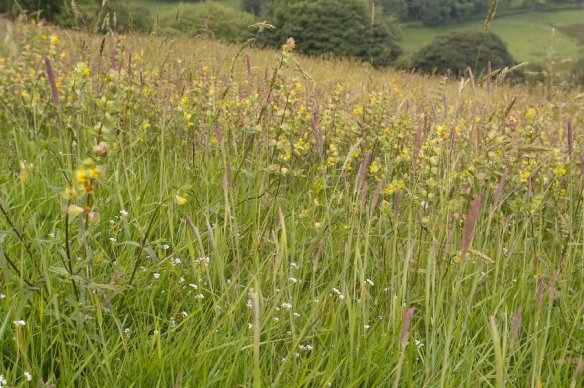 Thirdly, Quentin Macgarvie gave a summary of how he has managed, without the use of any machinery, his steeply sloping land close to Cynwyl Elfed, having also to tackle a bracken problem, including the use of Asulox as a treatment, as well as using Speckled Faced sheep as management aids. His photos showed the amazing transformation he has managed to achieve in these challenging conditions to creating meadows full of flowers. He also made the perceptive point that the process was a lengthy one, and required much careful observation and modifications to management to achieve this goal.

Finally, a brief discussion on the potential future direction of the group was led by Julian Wormald (JW). Julian had provided information sheets to all at the meeting, copied below, to focus attention on some of the issues.

Carmarthenshire Meadows Group (CMG)… Where Next?

History: In March 2015 the Carmarthenshire Biodiversity Partnership organised a meeting, hosted by Isabel Macho, the county’s biodiversity office, at the National Botanic Garden of Wales, for meadow owners in Carmarthenshire to discuss the formation of a Carmarthenshire Meadows Group. Over 60 people attended the event, which hoped to inspire the creation of a county-wide community of landowners that supports each other to improve the diversity of plants, fungi and animals on meadows, large or small, across Carmarthenshire. Meetings have been held, and a website set up (www.carmarthenshiremeadows.com), but no formal group structure exists 18 months later.

Should it? Three possible options…

Pros ?…. Easy, cheap and simple. (For those not already involved in any way)

Cons ?…. Will the CMG progress in any meaningful way without more formal membership? Will it even continue long term without a formal membership? Less resilient as is – what happens if a key person can’t continue with their input? At present there seem to be very few such people involved on a regular basis. Is the CMG even really a “group”, without some sort of membership structure?

2: Formalise a defined “group” with some sort of membership and possibly therefore an annual membership fee and at least a handful of people with some involvement in helping to run the group.

Pros?… It might get more people involved with planning/events/ideas, etc. Things don’t just happen on their own. It would be helpful for more contributions of ideas for speakers, visits, events and also articles/ photos/comments/ideas for the website. As things stand, does the existing website achieve what the “group” wants it to?

Having even a modest annual subscription would help with costs of booking venues, and maybe speakers’, and other, expenses.

Today’s hall hire will be paid for, via Isabel, by CCC for which we are very grateful. How long will this continue? Likewise whilst the website was set up and is maintained voluntarily by a “member” (JW), CCC currently pay for the annual fee to host it. Again we are very grateful for this funding, but is this viable long term?

Cons… How many people would be prepared to get involved?

How many would be prepared to pay an annual membership? How much…Say £10?

3: Affiliate the fledgling CMG within the Wildlife Trust of South West Wales (WTSWW) in some way.

This has provisionally been informally discussed by Isabel, Andrew Martin (AM) and JW.

Pros ?…It might mean a ready made template and constitution for the group, or at least some help and experience in setting one up. Would give access to other WTSWW sites/benefits

Cons?… Possibly a bit more than a stand alone group would need to charge. Could CMG monies be hypothecated in some way, to cover CMG specific expenses?

JW  began the discussion by saying how much he’s personally benefited from “being in the group” over the last 18 months, and thanking Isabel for getting the group going. He also repeated Isabel’s comments at the initial meeting that she saw her role as facilitator in trying to get the group off the ground – a role which she has achieved brilliantly.

After some discussion about the 2 group options – stand alone, or affiliation with WTSWW on which AM was able to shed some light, some concern was raised by Richard Pryce about whether the meadows group would lose it identity within the WTSWW. The upshot, after a proposal from the floor, was that a spontaneous vote was taken,  and by an overwhelming show of hands, it was agreed to try to develop a more defined but independent group, probably with an initial annual membership of, say, £10.

Anyone reading this and interested in helping to achieve it, together with all who signed a form to this effect at the meeting, are being invited to a second meeting probably on  Saturday November 19th, at a venue to be confirmed, to try to progress the idea.

So if you weren’t able to make the October meeting, but would like to be a part of this steering group, then do please get in touch now, to either Andrew Martin (andrew.martin26@btopenworld.com), or Isabel Macho ( IMacho@carmarthenshire.gov.uk) or Julian Wormald (Grumpyhobbit@gmail.com)