A cornucopia of snippets during this grey wet weather, when it’s mainly the moles that are having their moments in our meadows. Are fellow meadow owners bothered by moles? I view them as a sign that the ground is having some natural extra subterranean drainage created, and also that we have a fair earthworm population.

Richard Smith has just let me know that his team of egg spotters have found eggs of the elusive Brown Hairstreak butterfly in the hedgerows of Suzie’s farm at Cwrt Henri. Richard comments that it’s quite unusual to find a new site in the Twyi valley for this rare, and difficult to spot, butterfly which spends much of its adult life high up in tree canopies, only flying down to lay its eggs on semi mature blackthorn, which is obviously only found in hedges which aren’t flailed annually.  Click here for a link to a pdf and pictures of the Brown Hairstreak.

This reminds me that at this quieter time of the year, maybe I can tempt one or two more readers, as indeed Suzie has done, to send in some information to me to feature some details of their meadows on this website? The aim is to gradually build up a picture of the diversity of wildflower meadows in the county. You can look at the separate Meadows gallery page, underneath the header image at the top of this page, to see the variety of information and images that folk have already provided, and if you click here, you can access the questionnaire which might form a basis for information which you can send to me, and then I’ll upload it onto the website in due course. Contact details are listed on this page.

Fiona heard a strange bird call from our valley bottom wet meadows last week, and we both manged to spot the culprit as it flew off down the valley.

On a later date, and from quite a distance, I managed a few grainy pictures of the heron as it took off from beside our stream, bothered by my presence over 200 yards away. I’m still fascinated by how different birds appear, if frozen in flight – in particular with the heron, the way that its wings nearly reach a right angle bend mid way along.

If you’re unfamiliar with the heron’s strange flight call, then you can click here for a sound recording from the British library, where you’ll see it’s described as a “cough”. Though sounding to me more like a cross between that and a dog bark. Once heard, probably never forgotten. 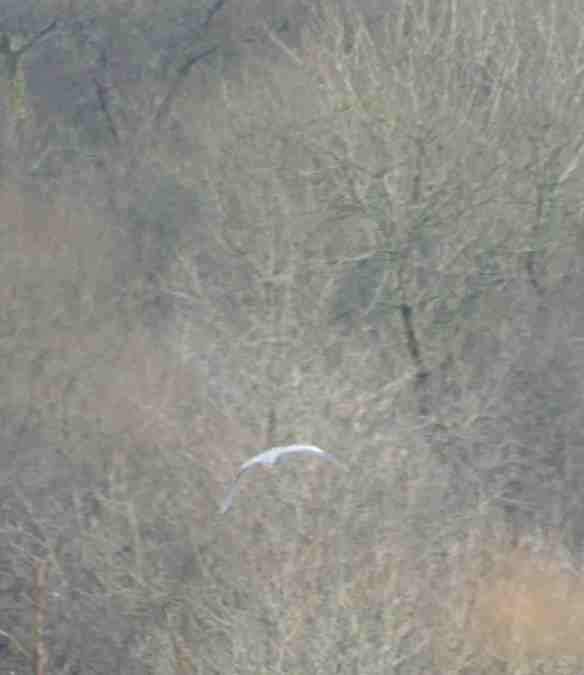 Quite different to the commonly heard twice or thrice repeated cronkk’s of ravens which seem to criss-cross our land at quite an altitude on a regular basis.

The cronkks giving way to the obvious sounds of those very strong wing beats if they pass overhead.

Not surprisingly though, no sounds from a patrolling sparrowhawk which flew quite close to me at dusk as I stood beneath a Sycamore on our top hedge. 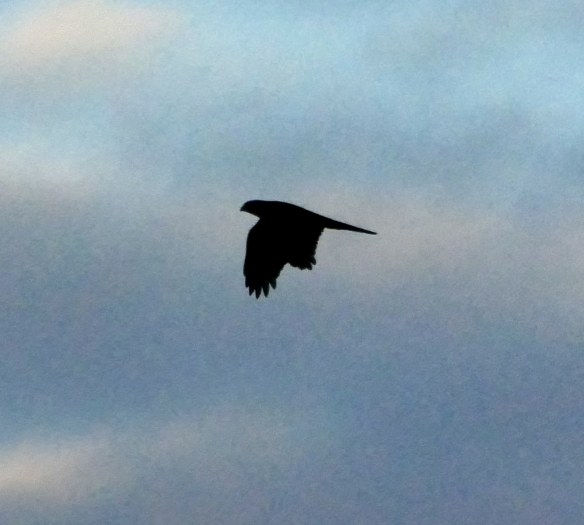 Quite a lot of events have now been pencilled in for the coming year for the Meadows Group. A finalised programme will be confirmed and published in due course, but for now it includes for meadow group members and the general public:

Talk on bumblebees by …TBC,

“Soft Rush – A Growing Problem ” – a film based local case study of soft rush control, which Julian has made.

Thanks to Bruce Langridge of the NBGW who will take us on a guided walk beginning from the gatehouse.

The walk could take 2 hours, so will be back in time for lunch.

Bruce says: Come and find out how the National Botanic Garden of Wales is farming its land for biodiversity. The walk will take in an orchid-rich hay meadow, a Welsh black cattle grazed rhos pasture and a field of international importance for waxcap fungi.

This will be free to any members of the National Botanic Gardens, and Bruce has kindly offered reduced daily entrance to the NBGW for any non-members of £5 per person.

For now there are events already being planned at Ruth Watkins’ 70 acre farm at Pencraig goch, Llandeusant, to include meadow walks and pond dipping; as well as meadow walks and a garden open day at the small holding of Gelli Uchaf, Rhydcymerau, with Julian and Fiona Wormald. I’m sure more will follow.

Thanks to Isabel, we hope to have George Peterken, author of the seminal book on meadow management, “Meadows” coming to talk to us, from Monmouthshire, along with another speaker or two, and discussion time.

In addition, for members of the meadows group, and thanks to organisation by Helen from Plantlife, we hope to have a subsidised manual scything course on a couple of days towards the end of August, (possibly Thursday 24 th and Saturday 26 th) at Cae Blaen Dyffryn near Lampeter, as well as meadow walks and possibly site visits to fellow meadow owner’s properties through the summer.

After a further planning meeting next week, of the events subgroup, I hope to be able to confirm most of these, and publish them on the Events page of the website.

Meanwhile as the days lengthen do remember to send me any snippets of news, or photos on topics related to meadows and their management.