Very many thanks to John and Caroline Starzewski for this introduction to the exciting project they’re just beginning….

Twenty five years of abandonment in Llangain comes to an end

In February 2017 we became proud owners of 7.7 acres of land close to where we live in Llangain. A view from the Southwest shows a row of houses; our field is immediately behind them. The land had been in use for grazing over many years and we managed to find a photograph from the 1930’s showing this. Since about 1992 the land has been left to its own devices so it became a riot of brambles, tussocky grassland, bracken, dumped garden waste and various items of discarded property including a red high-heeled shoe!

To gain initial access to the land we had to cut a 20m canyon in the 2m high brambles to reach the areas not choked with the prickly stuff and immediately saw the potential for preserving a wonderful series of habitats for plants and wildlife. 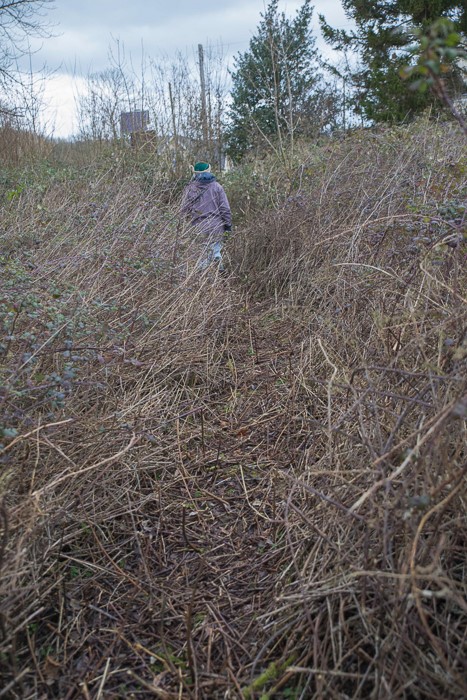 Our intention at the moment is to create (re create?) about 3.5 acres of wild flower meadow and leave  the balance of about 3.4 acres, mainly woodland largely untouched. The land is bisected by a pill which provides a logical division between the two areas.

Thus far we have managed to secure entry into the field for a limited amount of bramble control with a heavy duty flail mower which, during the process hit a hidden log and sheared the PTO drive so we have stopped for a while. Since then it has rained persistently calling a halt to any further clearing activity by this means, as a heavy tractor on wet ground would cut deep ruts into the surface and adversely affect soil structure. We plan to get a low ground pressure tractor to enable us to carry out our own field maintenance once initial clearance of the majority (not all) of the bramble overgrowth in the meadow area is achieved. 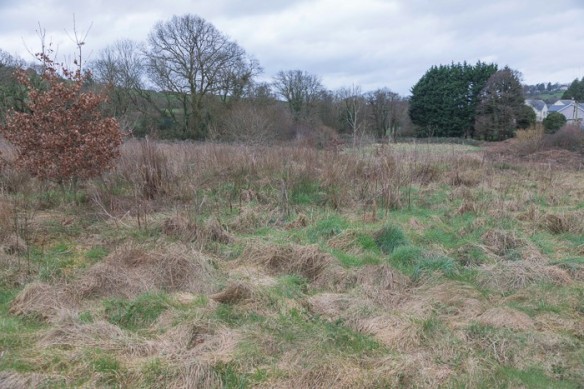 We have seen many Snowdrops and are anticipating Bluebells as well as other plant species in the shady edges of the field. There is abundant evidence of wildlife in the form of fox and badger tracks as well as vole holes; the local kite population patrols the skies above us indicating that there may be food sources available for them.

We have just had an ecological survey completed to help us establish a baseline evaluation of the inhabitants (plant and animal) of the land so that we are informed enough not to cause too much damage to what seems to us to be a small but very interesting area of Wales.

As we develop our understanding of what we have, we will provide further updates.

1 thought on “A Meadow’s Restoration Begins …”