Very many thanks for this report and the photos supplied by Andrew, of the recently held manual scything course, which a number of CMG members attended…

Having once used an old English pattern scythe many years ago, and decided it was of no use except as a form of punishment, it was very interesting to attend a course for Carmarthenshire Meadows Group and Plantlife members run by Phil Batten of Scythe Cymru at Plantlife’s fantastic Cae Blaen-dyffryn reserve near Lampeter.  The reserve is well known for its greater and lesser butterfly-orchids, and in the past the small rare fern moonwort (Botrychium lunaria) but moonwort hasn’t been found there for ten years.  Plantlife have now mapped all the historic records and held two scything courses in the appropriate part of the reserve, as well as making use of the maximum amount of grazing of the site allowed by Natural Resources Wales (six cows for eight weeks) to try to reduce the competition from other vegetation.  So next year, it will be interesting to see if it reappears.

The scything courses were run on 24th and 26th August, and I went on the 24th.  The numbers had to be restricted to 8 on each course.  We started by arranging ourselves in a line in order of height so that Phil could give us each the correct length of scythe shaft known as a snath – they come in a choice of lengths.  These are Austrian pattern scythes, very different to the one I’d tried years ago, much lighter, and very adjustable.  There are multiple holes in the snath for the attachment of both the upper and lower handles, and guidance was given on how to determine the optimum position of both. 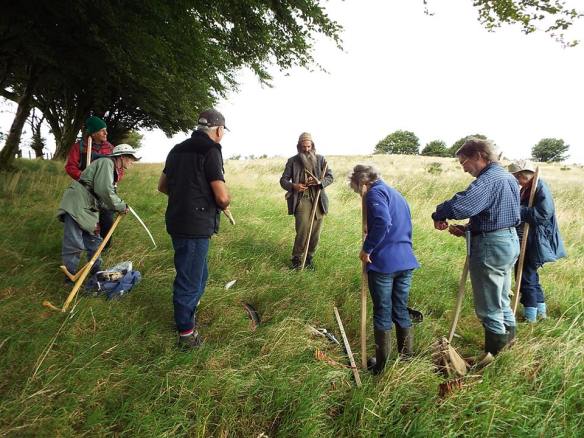 There are several lengths and types of blade to choose from depending on the intended purpose, and the blade is fitted to the end of the snath with a clamp which allows adjustment of the blade angle in two perpendicular planes; the “lay” of the blade and also its “hafting angle”.  This is hard to explain, but easy to follow if you look at the diagrams on Scythe Cymru’s excellent website: https://scythecymru.co.uk/

Cutting the meadow grass showed our collective lack of skill very quickly.  But Phil is a good tutor, and we all got a lot better at scything.  Soon we were all travelling along the field in a staggered row so that we each left our swath of cut grass on the right hand edge of the line cut by our neighbour in front and to the left of us. 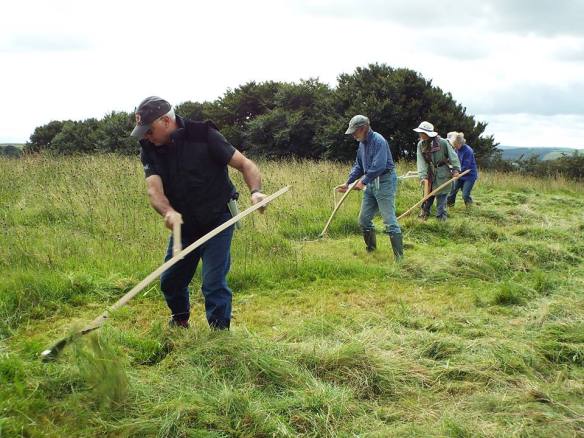 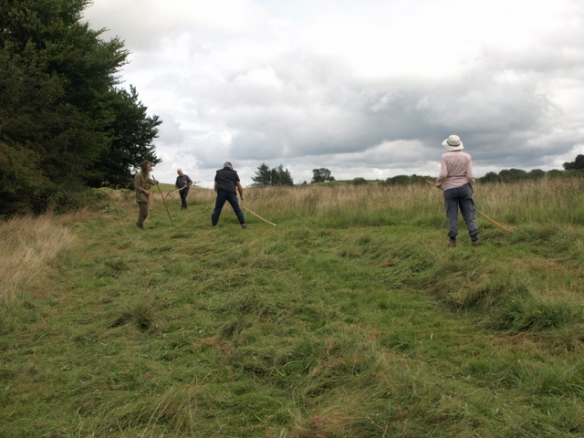 Grass contains a lot of particles of very abrasive silica, which is why grazing mammals have continuously growing teeth. This also means that the scythe blades need very frequent sharpening.  We were each equipped with a stone for sharpening the blade, and a galvanised metal holster for it which clips onto your belt and contains water (the stone is used wet).  The blade probably needs to be sharpened about every 10 to 12 feet of progress.

After a lunch break at the nearby school, Phil showed us how to “peen” the scythe blades.  As the thin edge of the blade is used up by sharpening, the remaining metal is too thick to form an efficient cutting edge.  It is therefore hammered, or “peened”, which results in the spreading of the metal near the edge of the blade to reduce its thickness.  This restores the edge so it is once again easy to sharpen with the stone during cutting. Phil showed us how to do this, using a cleverly designed jig made for the purpose.

During the afternoon session we continued to cut our strip of the field, with frequent sharpening stops.  It did seem harder work than the morning session which I assumed was just fatigue, but Phil assured us that it is actually much easier to cut damp grass with a scythe, such as after rain or before the dew has evaporated.

By around 4.15 we were probably all ready to stop.  Quite a large strip of the field had been cut

and it all had to be raked and collected up in builders bags by Helen and Colin from Plantlife and dragged down to the road for collection. 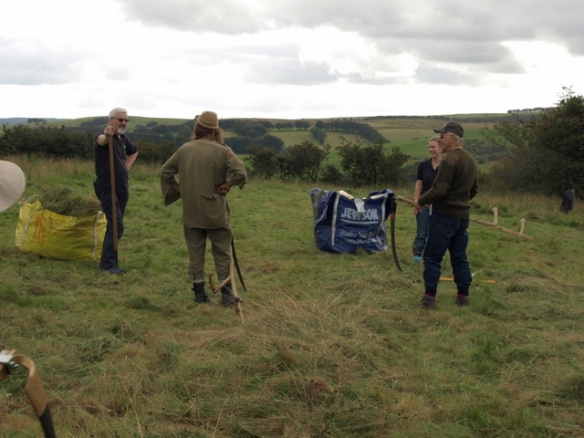 They probably worked harder than we had.

So would I cut our meadow with a scythe?  People do, and Phil and his partner Michelle cut their conservation meadows this way, and the cutting is spread over a longer period than if it was done mechanically: https://scythecymru.co.uk/hand-hay-making/

I don’t think I would want to cut a whole field this way, partly because I am far too lazy, and also because I would want to do it more quickly than this would allow, to make more use of narrow weather windows for drying and baling.  If there were 25 people out there scything, it would probably be quicker than using our old tractor and mower, but that’s not going to happen at our place.

Scythes are not only useful for hay cutting though.  With the shorter blades which are optimised for the purpose, they are very good for cutting, for example, encroaching bramble and bracken, even ditches: https://scythecymru.co.uk/2017/08/01/austrian-scythe-versatile-tool/.  In this context, I think it’s a viable alternative to a brush cutter in that it’s cheaper, quieter, in some ways safer to use, does not use fossil fuel or lubricants; and though it needs more skill to use, that also means it’s more satisfying to master.

Many thanks to Helen from Plantlife for organising this excellent and greatly subsidised course, taking the photos, and of course to Phil and Michelle of Scythe Cmryu for the great tuition.