Thanks very much for this detailed follow up by Andrew to the short piece I featured in a previous post on a German study hinting at significant declines in insect biomass over a 25 year period.

Everyone (well, anyone who has any concern over the environment) who read the media reports on the findings reported by the research mentioned by Julian in his recent blog post:

must have been very alarmed by it.  I certainly was.  For many years I worked at a research institute (Rothamsted Research).  The Rothamsted Insect Survey has been running insect traps at the same sites for many decades, and they probably hold the largest dataset of insect trapping records anywhere.  So I contacted the Insect Survey for their response to the findings reported in this paper, and they pointed out some relevant material…

The first media report of the research was this article:

The paper itself is here:

The paper itself (as opposed to the media reports of it) which was published in October 2017 describes fully the methodology used. Many of the media reports of the work do not.  There are some excellent articles and blog posts relating to the paper’s findings, they are not criticising the paper or the researchers, but the media’s dumbed-down reporting of it.  They also highlight the need for more long-term studies that would give us more information:

Many media reports about this research speak of a drop in insect abundance, but the authors of the paper do not claim this, they report a drop in insect biomass. Biomass is simply the total weight of the insect catches, without identifying or counting any individual insects.  This is quite different from abundance. Imagine two catches of a huge mix of insects (as these were), one including several individuals of one species of dragonfly, and one not.  Even if there was no other difference between the two catches, the one without the dragonflies would have much less biomass because dragonflies (as insects go) are very heavy.

Secondly, the study is not a longitudinal study. A longitudinal study is one where the same site is sampled year after year, this is the only reliable way to detect trends such as changes in biomass, abundance (where individual insects are counted) or species richness (where every insect is identified).  There is bound to be big variation from year to year, and only by comparing a long series of years can any real long term trend be detected.  In this study, few plots were revisited more than once.  This is noted by the researchers who state that “Most locations (59%, n = 37) were sampled in only one year, 20 locations in two years, five locations in three years, and one in four years, yielding in total 96 unique location-year combinations of measurements of seasonal total flying insect biomass. Our data do not represent longitudinal records at single sites, suitable to derive location specific trends (e.g. [28]). Prolonged trapping across years is in the present context (protected areas) deemed undesirable, as the sampling process itself can negatively impact local insect stocks. However, the data do permit an analysis at a higher spatial level, i.e. by treating seasonal insect biomass profiles as random samples of the state of entomofauna in protected areas in western Germany”.

The Insect Survey published its own analysis on biomass changes using the suction traps that collect migrating insects around the country and published here:

This isn’t available online to most of us, but in summary it found that declines in biomass had occurred at one of the four Southern England sites investigated, but not the other three. Furthermore, this decline in biomass was primarily driven by a decline in abundance of one species – the relatively heavy fever fly (Dilophus febrilis) alongside other large Diptera – with other taxa showing no change in abundance. So, it is possible that because the PLOS One paper doesn’t show the species composition, that the skew or decline is limited to a few species. We will perhaps never know.

Rothamsted’s longitudinal sampling of sites has, in some cases been going for 50 years.  For example, one study using the moth trap data flagged up that two-thirds of the 337 species studied declined over the 35 yr study and 21% (71) of the species declined  more than 30% 10 yr−1.  Again it’s not generally available online:

This finding was used by Butterfly Conservation with their State of Britain’s Larger Moths Report in the same year and later, a reanalysis incorporating new data for the 2013 report:

showed the same overall result. But, the picture is a mixed one and not as straightforward as a simple ‘decline’.  Declines were worse in southern Britain, with a 40% decrease in total abundance, while there was no overall change in northern Britain which have been offset by increases. Other taxa sampled extensively by the Rothamsted Insect Survey appear to show no trend over more than 50 years of monitoring. Aphids for example have shown little sign of change in overall numbers as noted by Harrington, Shortall & Woiwod in the book “Silent Summer”.

The Insect Survey is currently looking at one mechanim that has possibly caused decline, and possibly sampling error – light pollution.  Another study is ‘Investigating the mechanisms behind moth declines: plants, landscape, pollution and climate’. It has already found that the amount of field margin habitat around a moth trap significantly and positively affects moth abundance – but less so than woody vegetation. This suggests that we can make a difference, with achievable changes to agricultural practice.

Man has not yet managed to deliberately exterminate a single species of insect, not for want of trying.  But we really do need to monitor the invertebrate fauna closely, and frankly we need to do it in lots of boring detail, if we want to really understand what is happening.  If we are accidentally killing off lots of insect species, we and other vertebrates will be gone ourselves long before the rest of the insects have.  It’s only by carefully monitoring the natural world that we can know what we’re doing to it.

Just over a week ago, the subgroup of CMG had one of their occasional meetings to firm up plans for the events programme for 2018 and beyond. The meeting had been brought forward into early December, because Julian was a little worried about the risk of snow falling if it had been held in February.

Little did we think that just 3 days later one of the heaviest snowfalls in North Carmarthenshire in recent years fell overnight. It was 4 days before Julian could venture out. 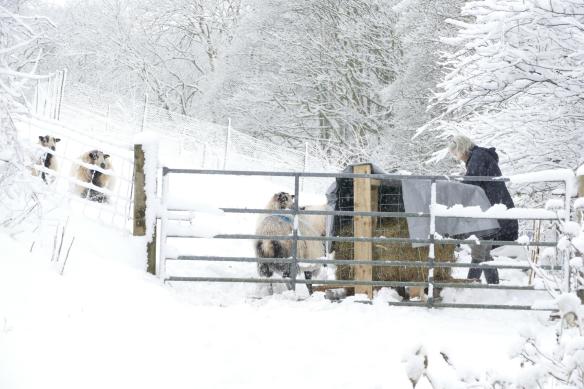 For those in the South and West of the county, a few images are included, to show what a climatically diverse county we live in!

In terms of the programme for next year, we now have a definite date, venue and speakers for the CMG spring meeting on Saturday March 24 th 2018 from 10 am to 1 pm, at Banc Y Felin Hall.

Professor David Thorne from Trinity St.David’s Lampeter University will talk to us on “Field Names and Mediciners”. Professor Thorne has extensive knowledge on the significance of Welsh field names and their history and usage. In addition Richard Pryce, the county’s botanical recorder will speak about Plant Indicator species for wildflower meadows. Richard and his wife Kath have been the county’s botanical recorders for many years and they have a wealth of knowledge and experience to share with us all.

This meeting will end with the AGM of the CMG, and this is a great time to raise any issues or ideas about how the CMG is developing.

We had been hoping to have Laura Jones talking to us as well about her research, based at the National Botanic Garden of Wales, on honeybee foraging but sadly this spring date clashed with a major bee keeping conference, so instead we’re delighted to have Laura coming to talk to us at our next meeting in the autumn.

This autumn CMG meeting will take place at Pumsaint hall on Saturday September 22nd 2018, again from 10.00 am to 1 pm. As well as Laura we hope to have Gareth Griffiths from Aberystwyth University talking to us about his work with grassland fungi, in particular Waxcap mushrooms, including his work on using soil analysis to detect fungal DNA; and also a short film presentation by Dave Bevan who is an extremely talented and experienced wildlife photographer based in Rhydcymerau, North Carmarthenshire. Some readers may recall seeing some of Dave’s photos of Dormice on these pages, and to whet your appetite further, follow the link below to a recent video clip of his.

The spring and autumn meetings will be free to members, and open to visitors for £3 per person.

We also have plans for a number of visits to meadows both within the county, and further afield throughout the summer of 2018. These will be open to all CMG members, but may need booking. More specific dates and details will follow in due course.

For the spring 2019 meeting we are already planning a presentation/discussion on options for haymaking on our meadows, and how some members do this, along with another speaker, still to be confirmed.

Wishing all our readers a very Happy Christmas and New Year. It seems from the weather forecasts that we may have had the last of snow in the county for 2017, so I’ll finish with some pictures of our robins, which have been particularly photogenic over the last fortnight… 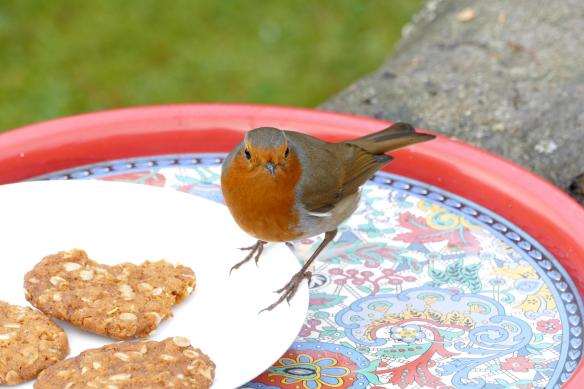 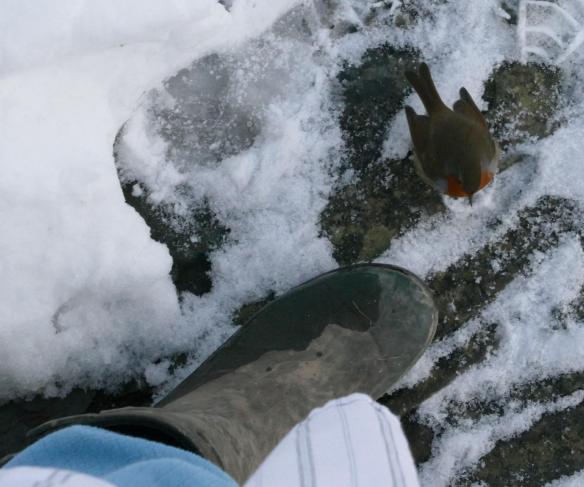 Thanks for reading, and remember I’m always happy to receive any suitable articles or photos to include as blog posts. Please send them to me…

1 thought on “Insect Biomass Decline – Follow Up; Provisional Programme for 2018.”