During his interesting talk on grassland indicator species at the Meadows Group meeting last Saturday Richard Pryce (our county plant recorder) highlighted the bulbous buttercup (Ranunculus bulbosus) as an indicator species of meadows with better draining, base-rich soils. Of the three main buttercup species recorded in the county, it is the only buttercup of meadows with down-turned sepals (see photograph below) and has a swollen base to the stem and hairy leaves. It also flowers a little earlier than the meadow buttercup, starting in late March through to late May.

Richard’s map (below) shows that is under-recorded in some parts of the county with few records since 1999. 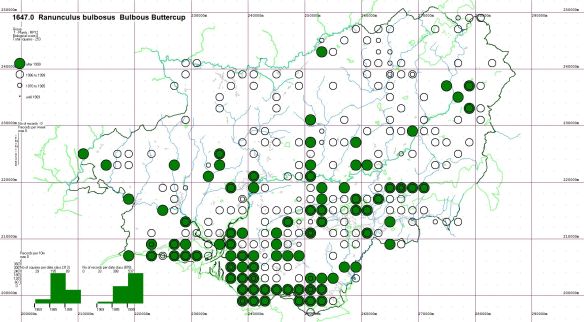 So, when you are out in your meadows enjoying the early spring sunshine (!!) why not check to see if you have bulbous buttercup and let Richard know – your records would be really useful to see how the plant is faring in the county.

Please send any records to Richard on: PryceEco@aol.com.