Very little gets written on these pages specifically about livestock on members’ meadows. Probably rightly so, but after Rachel’s plug for pictures, here’s a little piece about our own experiences. We realised very early on that we couldn’t manage some of our meadows for species diversity without some livestock input. We also worked out that beyond a certain minimal acreage, unless you’re fortunate enough to be able to get someone else to graze your land, you’ll probably need your own livestock, and also accept that only a modest proportion of your pasture will be able to become species rich – in particular those bits which are left for cutting for hay, or equivalent, later in the year. 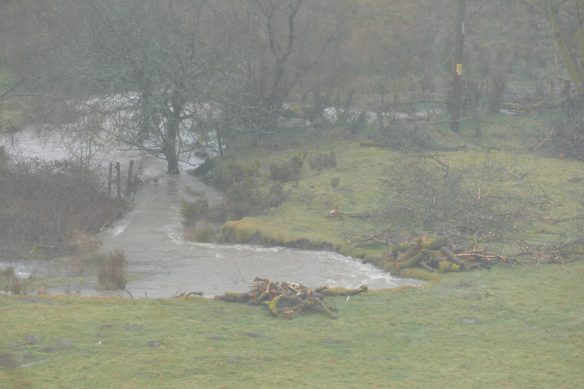 Equally we reckoned that because our land is a mix of steep upland hill and (sometimes very) wet valley bottom, sheep would be our preferred option. The other factors of having about 10 acres of pasture in total here, the desire to get something of food value off the land, and what we were comfortable with handling also pointed us this way.

With the considerable luxury of not having to justify their existence economically, we felt our way cautiously. Initially with just 2 yearling ewes (potentially in lamb when purchased), we then added another 2 in year one. From there, over 6 years, we’ve built up the numbers to our current 20 ewes, (though we never lamb them all each year), and this has also allowed us to feel our way with the several management issues of keeping sheep. Such as fencing, shearing, lambing, sourcing rams, stocking density, market for surplus lambs, etc.

None of this is that easy on a small scale, if you’re a beginner. But it’s hugely rewarding and as I pointed out in the credits of my film about soft rush management which got shown to the CMG group last spring, all of our named sheep are rightly credited with a massive role in what we’ve managed to achieve with our fields since we started this process. 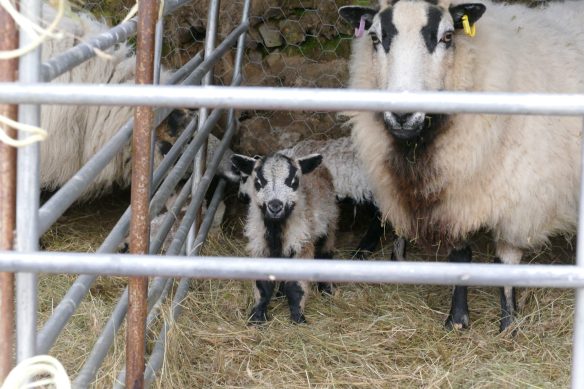 But for us, the single most important aspect of owning sheep on a small scale, without having a trained dog, is having well behaved friendly sheep. Partly this is down to the breed, or even strain, that you own. Partly how they’re managed. We have to be able to move our sheep anywhere we want using the carrot approach. This isn’t quite as easy as it might seem – a single flighty ewe will indeed lead others astray. 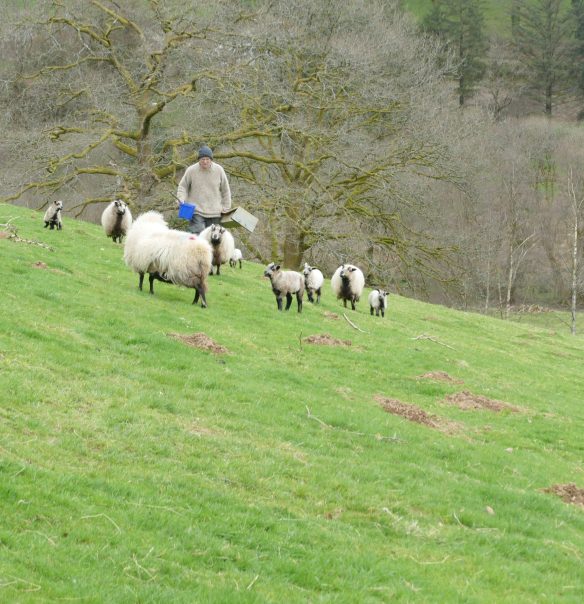 Aside from trying to be as calm and quiet as possible at all times, we’ve worked out that bonding with the very young lambs is the best way to achieve this. Just before, and certainly just after lambing, most ewes are only too keen to dive into a trough of ewe nuts. Our ewes are tough enough to lamb outside in all but the worst conditions if needs be, but we now delay lambing until April 1 st at the earliest to avoid the worst of the weather (?) We’ve found that so far this later lambing also seems to give us a higher percentage of ewe lambs.

Then either just before, if we can, or certainly just after, the lambs are born we try to spend time individually with each ewe and lamb, down at eye level talking calmly, and if possible tickling or stroking the lambs. ( 24 hours post birth below)…

We might let them outside during the day from 36 hours after delivery time, if the weather is fine, but we always walk them back in at night to our simple shelters. This gives them all a lot of close human contact when the ewes aren’t so keen to rush about. 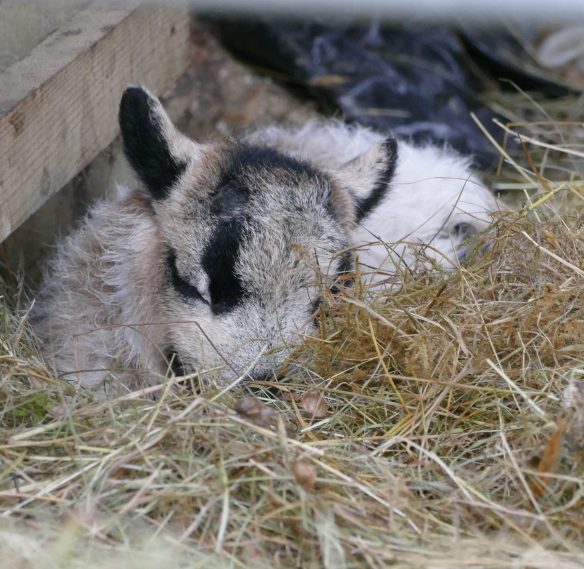 By the time they then stay outside all day and night (usually after a week or so), the lambs will come over and check you out as the ewes have their head in the trough. Again, being down and nearly at the lambs’ eye level seems to help with this process. The picture below shows half a dozen lambs which are quite happy to have their chests tickled – all under 2 weeks old, for minutes on end. The battle by now has been won. These sheep will be much more likely to integrate into the flock as placcid animals.

Whether wearing a woolly jumper and hat helps, I have no idea (!), but I wrote this piece to encourage anyone thinking about how to manage a few acres of meadow, to consider a few sheep as co workers. Yes, they can be demanding, ( “Hero” below, was rescued first thing after getting his front leg wedged between 2 pen hurdles) but they can also be really very rewarding, and I’d say, though maybe I’m biased, attractive animals to own.

Of course I accept that this is a ludicrous amount of fuss and time to spend if you have large numbers of livestock, so please excuse my comments if you fall into this category.

Perhaps next week with the predicted warmth, we shall at last have more than Celandines flowering in our meadows here, but for anyone looking for longer term trends, maybe click here for this link, on what’s happening to the Gulf Stream, or click here for another peek at what might lie ahead in May in the UK, or here for more on how farmers across Europe are faring. I’d love to have featured the Met Office reports, but am currently questioning them about their slightly strange weather reporting of late.

Will producing food from all of our potentially agricultural land become more of a pressing need in the years ahead? Does anyone else think that this has been the longest winter of sluggish grass growth they can remember? What will the knock on effects be for next winter and fodder supplies? Comments welcome.