As the person who manages the website for CMG, I must apologise for the late running of this blog post due to the prior arrival of way too much work.  I now am putting that right.  In time honoured fashion, you wait around for some blog posts to arrive and then 3 arrive all at once…..

Firstly a message from our Chairman, Andrew:

I thought the meeting on the 23 March at Drefach Felindre went well.  It was nice to see a good turnout.  We got our act together in publicising it a lot better than the previous indoor meeting, and it paid off.  Thanks to all who gave up their time and worked hard to make it a success, and thanks also to Julian, Laurence, and Lizzie for preparing and delivering such interesting and thought-provoking talks. [Rachel’s note: thanks too for Andrew’s talk with a wonderful wander through simple mechanised baling] 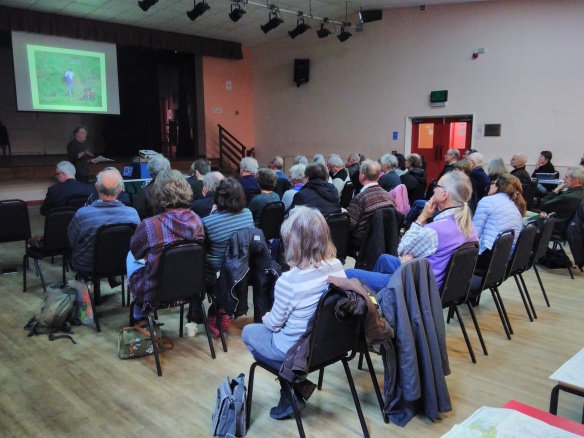 One of the things I thought that came out of the talks on haymaking was that it makes quite a difference whether or not you want the hay for your own livestock.  If you don’t, life is probably a lot easier.  You don’t have to take into account the quality or quantity of the hay crop, and so you can just leave cutting it until (a) most of the flora you want to encourage has flowered and seeded, and (b) you can get someone to come and cut and bale it.  If you get a farmer neighbour to do it, and your small field is last in the queue anyway, it doesn’t really matter if it gets done later than most of the others.

Since we started making our own haylage, we have found that in most years there is another flush of grasses after the yellow rattle has set seed and died off (it’s an annual).  That didn’t happen in 2018 because it was too dry, but that’s not been the case most years.  Cutting our fields late (late July/early august) lets a lot of species set seed, but we usually still get a decent number of bales, and the sheep farmer we sell them to assures us that the sheep prefer them to the species poor haylage he buys in as well (we don’t produce enough to keep his sheep going all winter).

But in case all this talk of backbreaking work, expensive equipment, fiddling about with temperamental old machinery, and stressing about weather windows makes you wonder if it’s all worth the effort, let me tell you about Derek’s Field.  When the meadows group first started, we went to see fields belonging to various people who thought setting up the group would be a good idea.  One field really stood out, because of the jaw-dropping diversity of the flora, and Derek showed us a list of species that Richard and Kath (county botanical recorders) had identified in the field – this was a very long list, several pages of A4.  I was really inspired and impressed by what this field has become, so with some trepidation I asked Derek how he’s managed to achieve such a level of diversity since he’d lived there. Expecting a complicated list of difficult, expensive, time consuming, complicated and onerous instructions when I asked Derek what he’d done, it was a bit of a shock when he said “I haven’t done anything.  I just get the farmer neighbour to cut and bale it late summer, he grudgingly says it’s not much good but it’ll do for animal bedding, and then he puts his sheep in there for a couple of months, and that’s it.”   If all our fields were as good as Derek’s, it would be a real achievement.

thanks Andrew for that – I would add that it was great to see lots of new members at the meeting and thanks to those who chose to renew their membership for another year.  We do have a great event lined up in autumn (more details soon) and we hope to see you there.  Please don’t forget to be in touch if there is anything that you would really like to have talks on.